Upon learning that the path from the parking area to the beach was only ¾ of a mile, my husband and I decided we’d walk there. The path seemed easy, at first, but quickly became very steep. Plus, we had to watch our footing, due to the large tree roots that ran every which way across the path.

When the sound of our labored breathing broke the silence of the forest surrounding us, I suggested we return to the car. “No,” James said, “I want to see the sea stacks.”

So, we continued to climb, stopping every few minutes to catch our breath. Finally, the well-worn path leveled out, and we strolled leisurely past centuries-old fir and cedar trees whose needles carpeted the forest floor. We paused from time to time to take pictures—of a fallen tree covered with velvety green moss, of another fallen tree whose base and roots were more than eight feet across…. 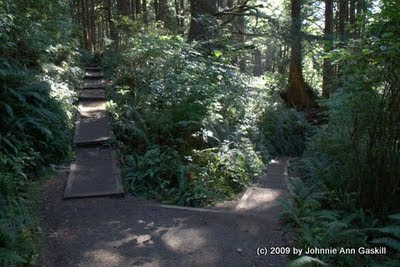 Soon the path began to change. As we began to descend, we assumed we were nearing the beach. But, as it turned out, we had quite a ways to go, and, unknown to us, a series of old, soil-filled, wooden steps lay ahead. Obviously, built to lessen the chances of visitors slipping on the steep slope, the steps were of varying sizes, some being two or three feet wide, while others were no more than a foot.

After walking down a few of them, I said, “Since we don’t know how many of these are ahead, let’s just turn around.”

“We’ve come too far to turn back now,” James said.

“But,” I protested, “we’ll have to climb these on the way back!”

Since he was determined to go on, we did. Several minutes later, I said, “I see blue sky through the trees, so we must be getting close to the beach.”

Finally, we reached our destination, only to find hundreds of huge, weathered tree trunks between us and the Pacific Ocean. We chose not to climb across them, though we watched some younger folks do so. 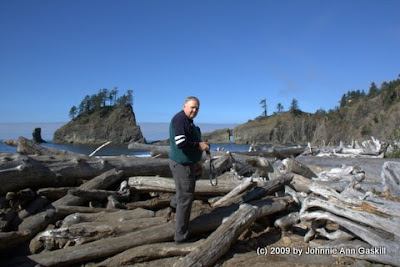 I held my breath as I watched one man step from trunk to trunk while balancing himself with a long stick he had found.

After taking some photos of the sea stacks (huge oddly shaped rock outcroppings in the ocean), we returned to the path that had brought us there, including the 100 soil-filled, wooden steps.

As we huffed and puffed our way back, I reflected on the experience. I realized that, as in life, the path we had opted to take had not been the easy trek we thought it would be. The destination had not been what we envisioned it to be. Yet, along the way, we made memories and gleaned new insights. (We also got some great exercise!)

Thankfully, the experience turned out to be a good one. We didn’t fall down and injure ourselves. We didn’t have a heart attack from all that exertion. We weren’t robbed. We weren’t attacked by a bear or bitten by a snake.

But had any of those things happened, we would have been forced to take yet another path with an unknown route and destination.

Since every “path” we take (marriage, family, career, etc.) is uncertain, we can only trust God to guide us and protect us.