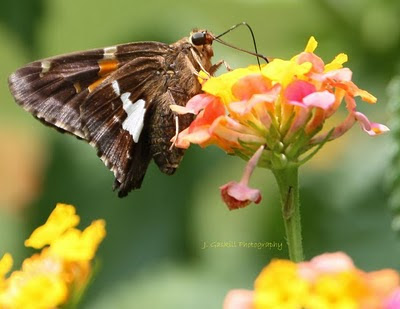 “Oh, my goodness! Come and look at this!” I said to my two oldest grandsons (ages 12 and 9) as I viewed the photos I’d taken earlier that day. “You can see the little straw-like thing that the butterfly is using to sip the nectar from the lantana!”
As we discussed the photo, I said, “I believe that little straw is called a proboscis.” A quick search on the Internet confirmed that.
Although I’ve taken lots of pictures of butterflies, I’ve either never taken a shot as sharp as the one I’d captured that day or else I’ve simply failed to notice the proboscis. But there it was!
That set me to thinking about how the Creator designed everything in great detail. No wonder, then, as He was creating the world and all that was in it, He often looked over His work and noted that it was good. (See Genesis, chapter 1.)
Photography enables me to get a closer look at His handiwork than I could with my natural eye. For example, I use a zoom lens to take a digital photo and then upload the image to my computer where I can magnify it even more, allowing me to see incredible details that I might have missed.
Thinking about this makes me wonder what else I’ve been failing to see, even though my physical eyesight is good (as long as I’m wearing my glasses).
As Jesus pointed out many centuries ago, “…people see what I do but they don’t really see. They hear what I say, but they don’t really hear, and they don’t understand. This fulfills the prophecy of Isaiah [6:9-10], which says, ‘You will hear my words, but you will not understand; you will see what I do, but you will not perceive its meaning. For the hearts of these people are hardened, and their ears cannot hear, and they have closed their eyes—so their eyes cannot see, and their ears cannot hear, and their hearts cannot understand, and they cannot turn to me and let me heal them’” (Matthew 13:13-15).
Since it is possible to have eyes that can see quite well yet often fail to see the incredible details all around us, it’s no wonder that we also fail to “see” (discern) deeper truths.
Thus, I hope that you, Dear Reader, and I will regularly use the words in the old hymn, “Open My Eyes That I May See,” as a prayer. Oh, how we need to see spiritual truths and to discern God’s will.