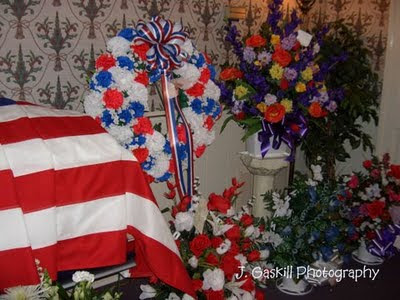 (My brother's coffin and flowers.)


Each time I’ve visited national cemeteries, I’ve sensed a reverential silence hovering over them. Visitors, even very young ones, speak softly. Some kneel beside a grave or stoop to arrange a bouquet of flowers. Others sit in contemplative silence underneath shade-giving trees. The atmosphere there seems a world apart from the hustle and bustle taking place outside.
Such was my experience the day my family and I visited Punchbowl, the National Memorial Cemetery of the Pacific, located in Hawaii. Inside that almost perfectly round crater of an extinct volcano, we walked along on paved paths that meandered past the grass-covered graves of over 33, 000 men and women who had lost their lives while fighting to preserve freedom for the citizens of the United States and its allies.
As we strolled along that picture-perfect day, I became increasingly aware of the magnitude of the sacrifices that had been made. In addition to seeing row upon row upon row of marked graves, I saw, inscribed on the massive marble walls to the right and to the left of the series of steep steps leading to the upper areas of the cemetery, the names of Missing in Action soldiers (26, 280 of them!).
Each of the more than 100 national cemeteries contains the bodies of thousands of fallen military heroes. For example, over 250,000 are entombed at Arlington, which is near Washington, DC.
Thus, the price paid, in terms of human suffering, is astronomical, especially if this fact is taken into consideration: All those thousands of men and women left behind loved ones whose grief followed them to their graves.
But in the idyllic national cemeteries, there’s little evidence of the hellish conditions many of the soldiers experienced before death provided a merciful escape. Peace reigns in the garden-like places where their bodies rest. That’s as it should be, for no group is more deserving of serenity than those who experienced the atrocities of war.

These words of Sir Walter Scott, the Scottish writer and poet who lived 1771-1832, articulate far better than any words of my own the feeling in my heart as I’ve strolled past row upon row of graves in several cemeteries: “Soldier, rest! Thy warfare o’er, / Sleep the sleep that knows not breaking, / Dream of battled fields no more. / Days of danger, nights of waking” (The Lady of the Lake, 1810).
Every Memorial Day observance calls upon us to remember the sacrifices and the contributions made in the past. Each one also reminds us to give thanks and to pray for those who are currently doing their best, often at great personal cost to themselves and their loved ones, to ensure that the precious freedoms secured in the past are preserved until that future time when all wars will have ceased and the Prince of Peace will reign forevermore.
Then, “there will be no more death or mourning or crying or pain, for the old order of things [will have] passed away” (Revelation 21:4, New International Version).

Posted by Johnnie Ann Gaskill at 5:54 PM No comments: 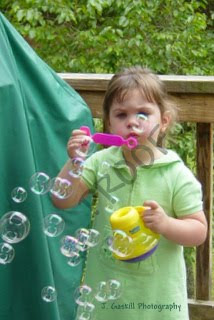 One afternoon when two-year-old Peyton was almost asleep in my arms, the phone rang. When I answered it, Peyton could also hear her mother’s voice. Peyton sat up immediately and reached for the phone. She and Jennifer talked for a minute before Jennifer said, “Go to sleep. Mama will be there when you wake up."

Knowing Jennifer needed to go, I said, “Peyton, give the phone to Nana, please.”

She obeyed, though I sensed she wanted to keep talking. She lay in my arms and listened to me assure her mom that all was well.

As soon as I told Jennifer good-bye and started to put the cordless phone on the sofa cushion beside me, Peyton began to whimper and to reach for the phone.

“Do you want to hold the phone?”

She drifted off to sleep, holding the phone close to her ear, hoping (expecting?) to hear her mother’s voice once again. Although I knew Peyton was very happy staying with me everyday while her mother taught school, I also understood that there was no voice as sweet or as dear to her as her mother’s. And that’s as it should be! I want her mother to hold first place in her heart.

That experience reminded me of a truth expressed by Henry and Richard Blackaby in their book, When God Speaks. It struck me the moment I read it. It still re-plays often in my mind, for it’s such wonderful advice for those of us who are seeking to hear the voice of the Lord and to obey Him. If there is no clear instruction, Blackaby says, wait until God does speak again.
Just keep doing whatever He told you last. (And don’t feel compelled to always be doing something.) But when God does speak, then do everything He tells you to do. (See p. 72.)

Like Peyton, we can rest peacefully, fully assured that soon we will hear the tender voice of the One who loves us even more than we love Him.