I noticed something quite peculiar while visiting Yellowstone National Park. Huge crowds gathered to wait for Old Faithful’s next eruption. Some who arrived shortly after the geyser’s last eruption would wait over an hour to watch the next one. They’d wait despite the weather. For example, one day the sunshine gave way to a sudden storm that produced thunder, lightning, and about an inch of ice pellets all over the ground. Even so, the visitors to Old Faithful stayed nearby. Some sought shelter inside the nearby buildings; others remained on the boardwalk.

But that was not the peculiar thing I observed. Neither was it the hush that descended upon the crowd as the time for the eruption neared. Neither was it the collective gasp of hundreds of onlookers as sprays of water and steam began spewing hundreds of feet into the air.
The peculiar thing I observed was the leaving of the crowd 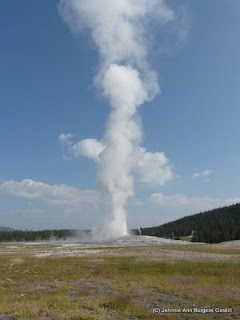 mere moments after the eruption began. As soon as most visitors had taken a photo or two, they rushed away to see another of the many wonders of Yellowstone.


I thought it odd that they chose not to linger even a few minutes to enjoy the awesome sight, which lasts less than five minutes. Five minutes!

Apparently, it isn’t easy to hold attention these days—no matter how riveting the performance. Sadly, far too many of us rush on to the next big event, eager to add one more thing to our been-there-done-that list.


We seem to have lost the ability to reflect on the wonder that is before us, whether that wonder is an erupting geyser or a flower flourishing in the cracks in the sidewalk.
How much better it would be if only we were like the people I observed sitting beside scenic sites they’d hiked more than a mile to see. Instead, after we’ve huffed and puffed to reach natural wonders like cascading waterfalls or crystal-clear lakes nestled at the bottom of snow-capped mountains, we pause only long enough to take a picture or two before hurrying back to the car to see what else is ahead.


We know little about quiet reflection and deep contemplation, both of which greatly relieve stress. But by our refusal to be still and enjoy the wonders of nature, we miss out on an even greater benefit: being prompted to worship the Creator.


For example, I doubt David could have written these beautiful words if he hadn’t spent time contemplating the beauty of nature and connecting what his physical senses were experiencing to what his spiritual senses were revealing to him:

Your unfailing love, O LORD, is as vast as the heavens; your faithfulness
reaches beyond the clouds. Your righteousness is like mighty mountains, your
justice like the ocean depths. You care for people and animals alike, O LORD.
How precious is your unfailing love, O God! All humanity finds shelter in the
shadow of your wings. You feed them from the abundance of your own house,
letting them drink from your rivers of delight. For you are the fountain of
life, the light by which we see (Psalm 36:5-9, New Living Translation).

Oh, Dear Reader, may you and I learn to linger long in the presence of the Creator and His creation.

© 2006 by Johnnie Ann Burgess Gaskill. For permission to use, please contact her. 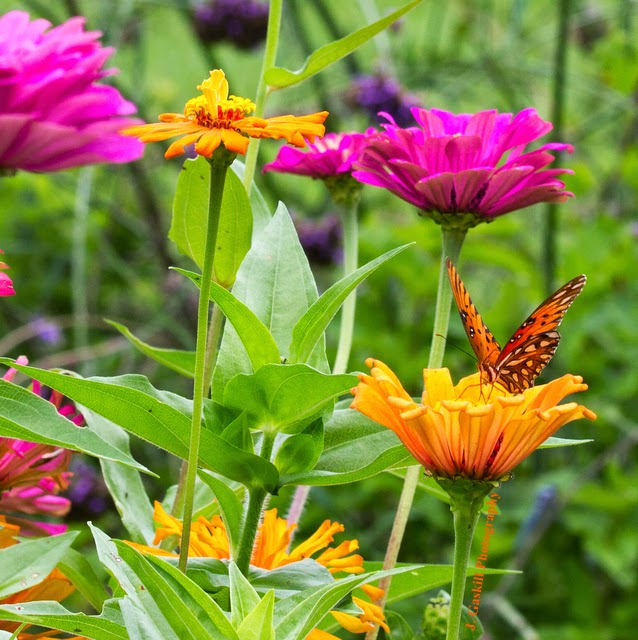 Happiness is like a butterfly
which, when pursued,
is always beyond our grasp,
but, if you will sit down quietly,
may alight upon you.
~Nathaniel Hawthorne
Posted by Johnnie Ann Gaskill No comments:

He entered and was passing through. And there was a man by the name of Zaccheus; he was a chief tax collector and he was rich. Zaccheus was trying to see who Jesus was, and was unable because of the crowd, for he was small in stature. So he ran on ahead and climbed up into a sycamore tree in order to see Him, for He was about to pass through that way. When Jesus came to the place, He looked up and said to him, “Zaccheus, hurry and come down, for today I must stay at your house."
Luke 19:1-5, NASB

During a phone conversation, a dear friend and I talked about the day we’d met (over twenty years ago).

“I just came into your office and interrupted your work,” she said.

As we laughed about that, I said, “Neither of us knew that meeting would be the beginning of a beautiful and lasting friendship, did we?”

Indeed, we have become as close as sisters as we’ve shared good times together, as well as times of struggle and heartbreak. Every conversation I have with her is a feast for our spirits as we laugh together and encourage one another. I thought about that a day or two later as I read these words in Mark Buchanan’s wonderful book, The Rest of God: Restoring Your Soul by Restoring Sabbath: “Think a moment of all the events and encounters that have shaped you most deeply and lastingly. How many did you see coming? How many did you engineer, manufacture, chase down? And how many were interruptions?” (Location #1462, Kindle)

Yes, often what we view as an interruption is actually God’s way of blessing us far more than we could envision, His way of leading us down paths He has chosen for us. For example, consider the life of Jesus. He lived with full awareness of His purpose; yet, He used “interruptions” as opportunities for healing and teaching and meeting all sorts of needs. The “interruptions” were, in fact, an integral part of His work. That’s true for us, as well. May we realize that.
Posted by Johnnie Ann Gaskill No comments:

So, Jesus, perceiving that they [the crowds] were intending to come
and take Him by force to make Him King,
withdrew again to the mountain by Himself alone.
John 4:15, NASB

Several passages of Scripture (like the one above) tell about how even Jesus needed to pull away from the pressures of life. Even He needed to pray and to seek the Father’s will in all things. Even He, for a brief time, had to leave His work, important though it was, in order to return to it even better equipped to carry it out.

Likewise, as the time drew near for His painful death on the cross, He went into the , as was His custom, for a time of earnest prayer. Although His disciples went there with Him, He “withdrew about a stone’s throw beyond them, knelt down and prayed, ‘Father, if you are willing, take this cup from me; yet not my will, but yours be done’” (Luke 22:41-42, NIV).

Dear Reader, may you and I set aside time to take a brief respite from the pressures of life in order to pray, to read the Word, and to rest our souls and bodies so that we can return—refreshed and ready—to whatever work/ministry God has given us. 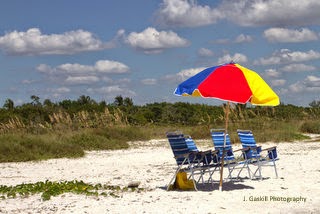 Note: We don’t have to go to the beach or to the mountains, etc. Any quiet, peaceful place will do!
Posted by Johnnie Ann Gaskill No comments: