Remember Those Who Served


Veterans Day observances touch my heart, no matter where they are held. As is my custom, I take photographs to help me remember the people and actions that impacted me most. 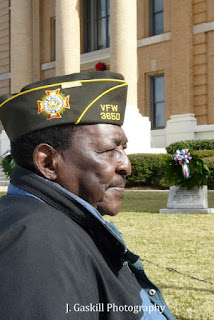 One of my favorite photos from the 2008 observance is of a Korean War veteran who was half-leaning, half-sitting on the hood of a car I assumed to be his. It was parked near the Korean War monument on the lawn of the courthouse, where the ceremony was being held. When I first noticed the veteran, he had a far way look in his eyes. Was he remembering experiences from the years he served? Had he known any of those whose names were inscribed on the monument? 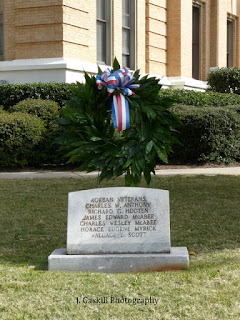 I walked over to him, thanked him for his service, and asked permission to photograph him. He looked at me with warm eyes, gave me a gentle smile, and then nodded. I wrote down his name and address so I could send him the photos. I saw him, from time to time, at the local Wal-Mart and always stopped to talk with him and to thank him, once again, for his service. But those opportunities are over because he passed away this year (2012).

Another touching photo was also taken in 2008, this time at an observance held at a small airport. I took the photo as two gentlemen, proudly wearing their Army uniforms, held onto each other’s hands as they walked across a pedestrian bridge at the conclusion of one portion of the ceremony. Perhaps they had served together. Perhaps they had met later. Perhaps they were strangers. But the fact that they were each lending a hand to help the other touched my heart—and still does. 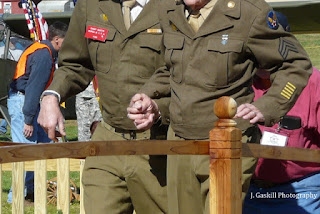 I plan to attend this year’s observance, too, not only to take photographs but also to let my presence express my gratitude to all those who served in any capacity. They and their families gave up so much in order to serve. Therefore, we must not fail to acknowledge their service and to thank them for it. 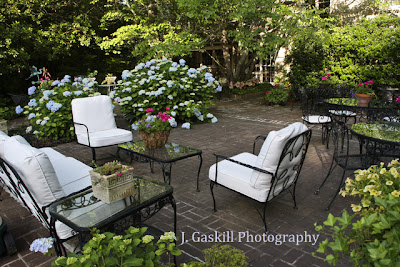 Knowing I love to photograph “all things nature,” my neighbor often says, “Come over anytime you want to.” Whenever she thinks there’s something extra special on her patio, she’ll call to tell me about it, as she did one Spring day when the patio looked especially nice (following a garden club meeting). I walked over late that afternoon and spent an hour or more delighting in the results of her hard work. Knowing that “early” light provides a different “look” for the photos, I returned the following morning.
One chilly morning in late October, I returned to the patio, not to photograph the upholstered furniture or the big hydrangea bushes, for their beautiful blue blooms were “past their prime.” My attention was on the fall leaves that had floated lazily down, decorating the tables and the brick pavers and the grass and the flower pots…. As I photographed, I liked not only what I was seeing but also the sound of the leaves as they crunched beneath my feet. 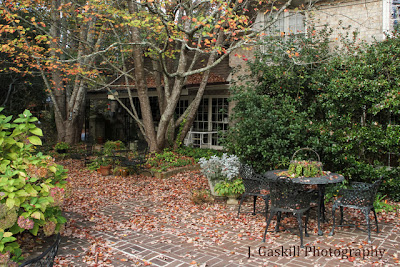 Seeing how the patio looked very different in the Fall than it had in the Spring, I reflected on what Solomon said in Ecclesiastes 3:11(New Living Translation): “God has made everything beautiful for its own time.” Indeed, God does transform everything (and everyone!) according to His plans and purposes. So, as I delight in the beauty that’s all around me at any given time, I’m also eager to see how He will make that thing (or that person!) even more beautiful in the days ahead.

(c) 2012 by Johnnie Ann Burgess Gaskill. For permission to use, please contact me at johnniegaskillATgmailDOTcom.
Posted by Johnnie Ann Gaskill No comments: