We worked in silence most of the time, not because we had to but because we were concentrating hard on the 16x20 oil painting we were supposed to complete during the eight-hour session. As the instructor began to move from student to student, someone called out, “Help! I need the magic brush!”


Soft laughter erupted, and then several others said, “Me, too!”

That continued throughout the day. But while we waited our turn for help, we’d look more closely at the instructor’s painting that was projected on large TV screens and try to do what she had done.

Applying the paint to the canvas had looked so easy—effortless, actually—when the instructor had shown us how. But whenever we tried to paint the same part of the picture on our canvas, the clouds or the barn or whatever we were painting at the time didn’t look as wonderful as hers. So, we’d cry out, “Help! I need the magic brush!”

As soon as the instructor arrived at our easel, she’d make a cheerful comment and then take a long-handled brush like the one we were using, load it with some of the paint we’d mixed on our palettes, and then deftly apply it to our canvas. Within seconds she’d transform our round blobs into natural-looking rocks or our un-natural-looking water into a flowing, shimmering creek. Then she’d move on to the next student in need of the “magic brush.” 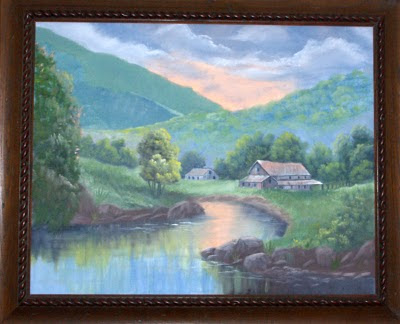 Actually, it wasn’t the brush that made the difference, else those of us who were using a brush like hers could have painted beautifully without any assistance. It was the teacher’s ability that brought about the transformation. Had it not been for her, many of us would have gone home with a mess rather than a beautiful oil painting we were proud to display.


Now, she didn’t do all of our work for us. Quite the contrary! We tried as hard as we could to do exactly what she had done, but whenever we called for help, she’d come right alongside us and show us what to do. Not once did she reprimand anyone for not listening carefully, for not remembering what she had said to do, for not trying hard enough, or for not being able to paint as well as she could.

She knew we wanted to learn. And even though some of us had to be told and re-told what to do, to be shown and re-shown, she remained patient.

As I reflected on that experience, I began to see how it paralleled, in some ways, that of Jesus and His disciples. What He did looked so easy, so effortless. But when they tried to perform a similar miracle, they couldn’t do it. More than once, they had to call on Him to do what they couldn’t do.


Naturally, they were terribly upset when He told them He was going away. However, He assured them they would continue to have a Teacher. “But when the Father sends the Counselor as my representative—and by the Counselor I mean the Holy Spirit—he will teach you everything and will remind you of everything I myself have told you” (John 14:26).


An ever-present teacher! What a gift! And there’s more Good News: the Teacher is always with you and me, too, enabling us to be and do far more than we (or anyone else!) ever thought possible.