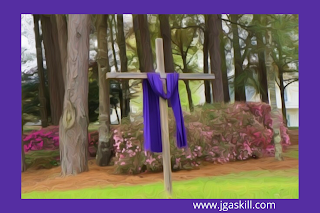 One Friday many centuries ago, those who either witnessed the death of Jesus on the cross or heard about it experienced intense—and varied—emotions. Those who hated Him thought, Good riddance! Those who loved Him lamented His passing. Those who followed Him in hopes of receiving a miracle from Him regretted that He died before bestowing a blessing on them. Those who had left all to follow Him as He taught and ministered throughout the area mourned the loss of the One they called Master. Perhaps they thought, We never dreamed it would end like this—and so soon. Perhaps they asked themselves, How could we have been so wrong about Him? Perhaps they wondered, What are we supposed to do now? Return to the life we had before we believed in Him and followed Him?

The fearful, troubled disciples could have experienced comfort and peace if only they had truly believed Jesus when He repeatedly told them that He would die and that He would also rise again in three days. But as they grappled with their grief, they either forgot what He’d said about His death and resurrection or else refused to believe either would happen. If they had truly believed Him, they could have spent those hours following His death anticipating the miracle of new life for Him—and for them.

Don’t we, like they, think of life as a perpetual “Friday?” Don’t we hyper-focus on the harsh realities and fail to see the good God is bringing out of them? But Romans 8:28 assures us that He can and will cause all things to work together for His glory and our good. Don’t we go through life hopeless and defeated and discouraged and ...?

We may think that way, but we don’t have to! Granted, evidence often indicates that it’s Friday, but let’s refuse to give up on God. Let’s remember Sunday IS coming! Let’s remember the words that Jesus spoke to His disciples prior to His death: “In the world you will have tribulation; but be of good cheer, I have overcome the world” (John 16:33, NKJV).

He lives in us and is with us at all time. Because He has overcome, we also overcome. Because He lives, we also live—abundantly—both now and throughout all eternity.
Posted by Johnnie Ann Gaskill No comments:

One Saturday (April 4, 2020) after we’d been “sheltering in place” for over three weeks during the coronavirus outbreak, I said to my husband, “I want to see our daughters and their families. I can’t wait any longer.”
He said, “We’ll go this afternoon.”
Jena and her family came out to greet us. We couldn’t hug them or go inside their house, as we normally would have done. Instead, we stood on their driveway and laughed and talked for about 15 minutes, careful to maintain “social distance” (at least six feet apart).
After having been cooped up indoors for days and days, we especially enjoyed the sunshine, the light and variable breezes, the sight and smell of freshly cut grass, and the birds’ happy chirping.
When we arrived at our other daughter’s house, Jennifer and her family, along with Chloe (their black Lab) came out to “visit” with us. Seeing them looking so well and happy delighted us. We talked and laughed together until we said reluctant goodbyes and headed home.
The following day, as I listened via Facebook to a Sunday School lesson, a phrase in the familiar Scripture passage the teacher read aloud stood out to me.
Why? Because of the joy I’d experienced at being face to face with those dearest to me, I felt a deep appreciation for the promise found in these words written centuries ago by the apostle John: 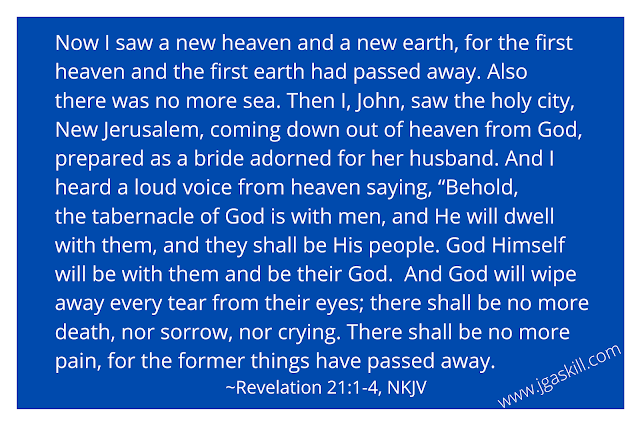 One day, God will take us to the beautiful place He has prepared for us. We will live forever with Him in that pain-and-problem-free environment.
As I thought about the wonder of that, I realized anew that God has always loved His children and longed for us. Genesis, the first book in the Bible, tells us that God created a beautiful world and then created a man and a woman to enjoy it. Even though they sinned and had to be banished from the Garden of Eden, God has never stopped loving His children and longing to be in close relationship with them.
Story after story in the Bible verifies that. The last book in the Bible promises that God and His children will finally be together forever. That joy will be far greater than the joy I felt when seeing my daughters and their families face to face.

Note: Here’s the link to a portion of the song, What a Day That Will Be. It was written by Jim Hill, ©1955. May it bless you. https://www.youtube.com/watch?v=40lCmHvmcCY