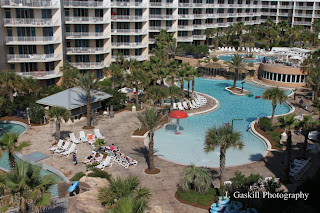 After sunset one evening, I sat by a pool in Fort Walton Beach and watched two of my grandsons laughing and splashing in the water. While sitting there, I noticed a hotel employee who was arranging the chairs and lounges that had been moved helter-skelter by guests who had used that area all during the day. His body was as thin as a string bean and his expression was serious—almost lifeless, really, because there seemed no spark in him as he methodically returned the white chairs to their places at the dozens of round tables and as he placed the lounge chairs in straight rows along the sides of the pool so they’d be ready for the next day’s crowd of sunbathers who needed to keep a careful eye on their children.
I wondered why he was so solemn. Had he done this particular task each evening for no telling how long and was, therefore, very bored with it? Was he longing to do something more exciting than rearranging chairs and closing big umbrellas?
Since I make it a habit to speak to "service" employees as often as I can because it seems that many people consider them “part of the landscape” (if they really see them at all), I resolved to find an opportunity to speak to that young man. Thankfully, as I was leaving the area, I happened to pass him. I stopped for a moment, made eye contact, and then said, “This is a beautiful place, isn’t it?” 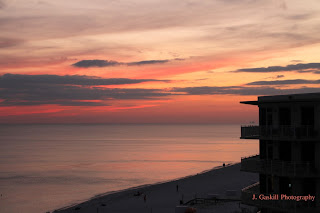 “Yes, it is,” he agreed. “Especially at sunset when the sky turns all shades of red and orange.”
“It was that way tonight!” I said. “I think I got a beautiful picture of it, too.”
“I tried,” he said, “but the camera in my cell phone isn’t very good.”
“Well, you may have to do what a friend advised me to do whenever I see wonderful shots but don’t have my camera with me. ‘Just take pictures with your eyes,’ she told me.”

He nodded.
“That’s what I’m doing tonight,” I said. “I left my camera in our room, but I’ve taken hundreds of pictures with my eyes because I’ve noticed how this pool area looks soooo different tonight than it did earlier today when I was here with the boys. It looks magical,” I added. “All these lights create such interesting shadows and silhouettes.” 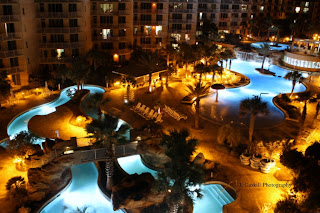 He nodded, and I could tell by the sparkle in his eyes that he truly agreed with me.
Encouraged by his obvious interest in photography, I continued talking. “Even if we take pictures with our eyes, we're developing our skill as a photographer. We’re learning to see, to compose our shots, to think about what interests us in whatever scene is before us…”
He nodded once again, a shy smile lighting up his thin face.
“However,” I admitted, “we do love having pictures to take home with us so that we can revisit places and re-live experiences, don’t we.”
Once again, he nodded.
We smiled at each other before we went our separate ways. I was glad, and I believe he was, to have met a kindred spirit.