For me, one of the most exciting things that happened during a day-long “water workshop” I attended was watching fellow camera club members become increasingly creative.


The two photography instructors had set up “stations” around the large room, each designed to provide a different kind of image. For example, one station had a glass baking dish half-filled with water to which a few drops of oil had been added. Underneath the dish was a multi-colored piece of fabric. All of that was sitting atop a light box, which lighted the dish from below. Other lights were strategically placed to illumine the sides.

After each student who photographed at that station gently stirred the water in order to move the drops of oil around, he or she began snapping images, varying the camera’s position and settings.

As the eleven of us worked, the instructors stayed nearby, offering guidance when needed.
As we experienced some measure of success at the various stations, we began to say, “I wonder what would happen if…” Soon students were working together, varying the lighting and the angles, changing out backgrounds and props, and so forth.

Because I was still recovering from having had blood clots in my lungs, I was more of an onlooker than an active participant, which allowed me to watch adults becoming increasingly creative—and having so much fun in the process, like children do.

A few weeks later, I was reminded of that experience the morning my grandson (age 3) began playing with Tinkertoys the three older grandchildren have enjoyed through the years. As he dumped the wo 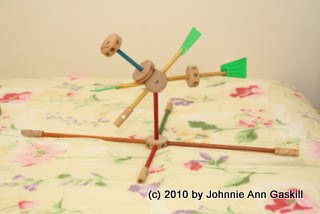 oden sticks and circles and other components onto the bed where we were playing, the instruction sheet fell out.


“Nana, let’s make these,” Michael said, pointing to the diagrams.

Not upset by that, he began using the available pieces to make unique designs. For a time, I worked alongside him, creating fairly typical things like a flower, etc. But I began to notice that he wasn’t even attempting to create anything that already had a name. He was simply having fun fitting all the pieces together—in no particular order. And, let me tell you, he created some rather grand designs.

Naturally, I had to take pictures of him and his creations. So, for more than an hour he continued to be engrossed in his designs as I snapped photo after photo. (The external flash on my camera was pointed toward the white ceiling, causing reflected light to fall softly upon him, keeping him from being distracted—or blinded—by bright light.) While he played with his toys, I “played” with my camera by changing settings and lenses and shooting positions, and so forth. So, once again, as during the photography workshop, “A good time was had by all.”


As I reflect on that, I wonder why we adults rarely permit ourselves to enjoy creative activities. Why do we feel we ought to suppress that wonderful ability our Creator has placed within us? After all, He is creative! Beginning with the first book in the Bible, there are all sorts of acknowledgements of His creativity. Since He obviously enjoys expressing His creativity and surveying with pleasure His work, shouldn’t we?

©2010 by Johnnie Ann Burgess Gaskill. For permission to use, please contact her at johnniegaskillDOTgmailDOT com.
Posted by Johnnie Ann Gaskill No comments: