Sometimes I feel so inadequate, especially when I look at the long list of things I need to do or whenever a task seems too difficult. And when I think about how well others appear to be doing with their tasks, I feel even more inadequate—and less inclined to do whatever is before me. 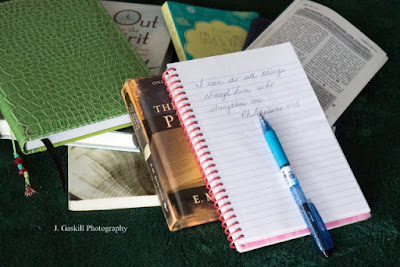 That's what’s been happening to me in recent days. Since I’ve felt inadequate to write anything that others will find meaningful, I’ve kinda given up on writing anything, despite the fact that I know with absolute certainty God has called me to write messages about His love (and comfort and encouragement and…) and share them with fellow pilgrims along life’s journey. Instead of writing, I’ve been reading the writings of authors, who, in my opinion, are far more effective than I am. Thus, I’ve let my feelings of inadequacy paralyze me.
But today, as I listened to an on-line Bible study led by Bob Dowie, he seemed to be speaking directly to me when he said, “Whatever gift God gives you, He will give you the grace to use it.”

So, after confessing my sin of disobedience to the call of God upon my life and asking Him to help me be faithful and effective in His service, I sat down and began writing these words in the hope that they will encourage you, Dear Reader, to do whatever God has called you to do and/or to face whatever difficulty He’s set before you, knowing that God will give you (and me!) whatever we need to accomplish His purposes.

I can do all things
through him
who strengthens me.


~The Apostle Paul in Philippians 4:13, ESV
Posted by Johnnie Ann Gaskill No comments:

His Life Is Love Expressed 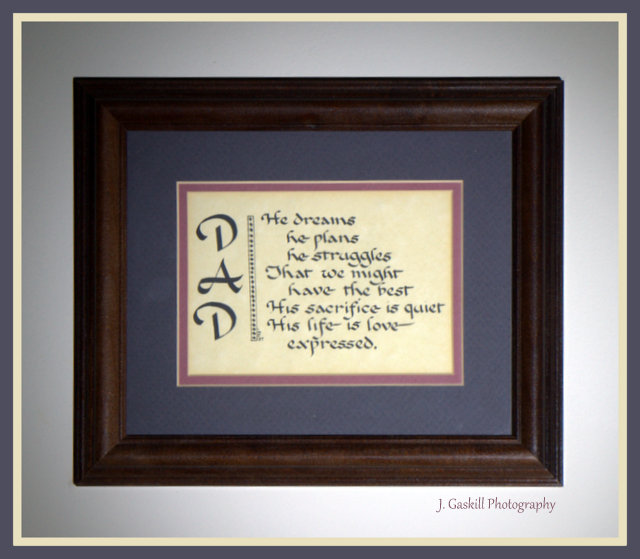 I have no idea who wrote those words, but they certainly apply to many dads. I, for one, am very grateful for those men whose lives are “love expressed.” I pray that their children will notice their dad’s quiet sacrifice and realize how blessed they are to have (or to have had) such a wonderful dad.

I’m also aware that not all dads are as described above. But the children of dads who mistreated them and/or abandoned them can also take comfort in this great truth expressed again and again in the Bible: We have a Heavenly Father who loves us far more than even the best of earthly fathers ever could.
David certainly found that to be true in his life. Again and again, like a wonderful father, God came to his rescue. God forgave him. God gave him extraordinary opportunities and blessings. Throughout David’s life, God talked with him and listened as David talked to Him. All that (and much more) prompted David to describe God as a “Father to the fatherless, defender of widows…” (Psalm 68:5).
Jesus also often reminded His followers that God was not only His Father but theirs, as well. For example, when Jesus was teaching His followers how to pray, He taught them to address God as “Our Father in heaven” (Matthew 6:9).
And in Luke 12, Jesus assured His followers their Father would most surely provide for them. “Don’t worry about money and possessions! Your heavenly Father already knows your needs and will give you all you need from day to day—if you make the your primary focus!”
Not only will our Heavenly Father supply all that we need for day-to-day living, but it gives Him great happiness to do so! (See Luke 12.).

How blessed we are to have such a Father!!! And if we’ve also been gifted with an earthly father whose life is “love expressed,” well that’s, as a dear friend and neighbor of ours often said, “Doubly good. Doubly good.” 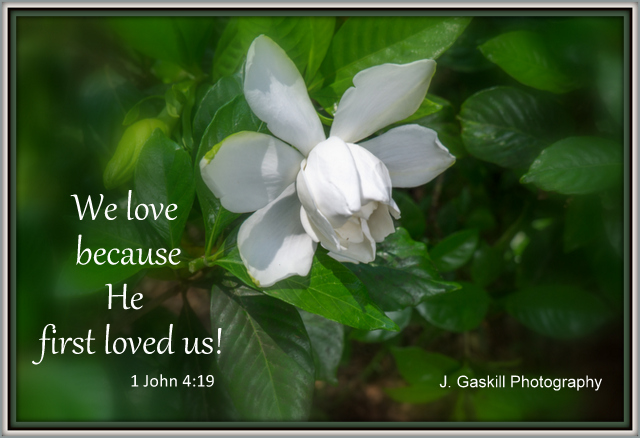 The Word of God Stands Forever 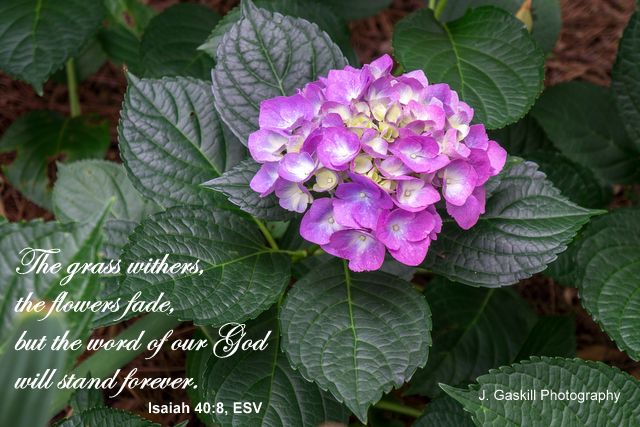 My Eyes Are on Thee

What do you do when you face a huge problem, one that seems beyond human ability to solve?

Perhaps you do what I am prone to do: Worry! Talk with others to get their “take” on it. Consult the experts. Eat comfort food. Mope around, weighted down with despair and uncertainty.

But, Dear Reader, if you and I are wise, we’ll do what King Jehoshaphat did many centuries ago when hordes of enemies were coming to attack his kingdom. He first sought the Lord’s will in the matter: he prayed; he fasted; he commanded his countrymen to do the same.

I love the conversation he had with God. (Thankfully, it’s recorded in 2 Chronicles, chapter 20.) The king said, “We are powerless against this great horde….We do not know what to do, but our eyes are on Thee.” 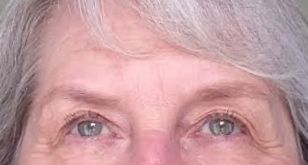 What did God say? Here’s a paraphrased gist of it, which is what He says to us whenever we cry out to Him for help: “Do not be afraid and do not be dismayed at the size/scope of the problem. The battle is not yours but Mine…You will not need to fight in this battle. Instead, go out against the enemy; but then, knowing I am with you, stand firm, hold your position, and see the salvation of the LORD on your behalf” (Based on vv. 12-17).

As promised, God gave them a great victory, and the king and his army didn’t even have to fight the enemy!

Wouldn’t we love for God to do that for us? He will—if only we’ll turn to Him in humility and trust in His love for us and His willingness to help us. (After all, we ARE His children, the children He loves!)

Do we have to be perfect in order for God to do something miraculous for us? No! King Jehoshaphat certainly wasn’t. Although he’d done much that was right, he did have some bad decisions on his record, as you and I certainly do.

So…Dear Reader, let’s seek the Lord, rely on Him, and thank Him and praise Him (in advance!) for the victory He will give us.
Posted by Johnnie Ann Gaskill No comments:

Gifts We Leave Behind

And through his [Abel's] faith, though he died, he still speaks.
Hebrews 11:4

When my husband I visited friends whose 57-year-old son had died suddenly two years ago, they gave us a CD of music their son had written and performed. How thankful I am that his family had taken time to collect samples of his work and to save them (on CD) for posterity. Their gift of his beautiful instrumental music has blessed me so much. For example, I feel such peace as I listen to his music while I’m writing or doing household tasks, etc. 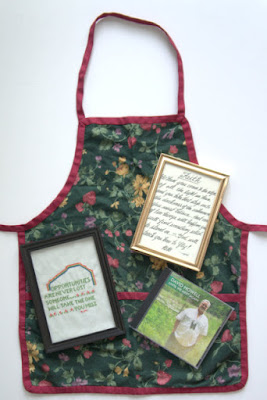 That gift prompted me to think of other gifts I cherish, gifts created by persons who are now deceased: Mama’s hand-sewn aprons, crocheted blankets, handmade quilts; Ruby’s counted cross stitch plaque; B. B.'s quotes he wrote in beautiful calligraphy….

Even though their voices are silent now and their hands still, their lives still “speak” and continue to bless me through not only the memories I have of them but also through the physical things they took time to create/preserve for me.

As I reflected on their gifts, I wondered, What gifts am I preparing to leave behind for others? 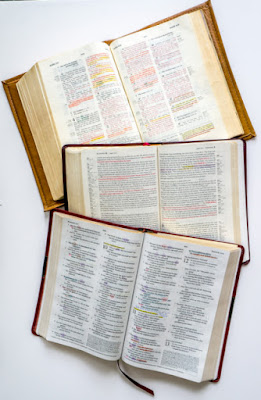 I thought of several, all unfinished at this point. I’m reading through the Bible each year and highlighting certain words and phrases and making notes in the margins, as is my custom. During the many years I taught Sunday School, I used a New American Standard Bible (NASB) that featured wide margins, as well as study notes by Charles Ryrie. In 1997, church librarians, with whom I’d worked for several years, gave me a New Living Translation (NLT) as a parting gift when my husband and I moved away. I used it until this year (2015) when I purchased an English Standard Version (ESV) so I can more easily follow along as my pastor reads aloud Scripture passages during worship services. Thus, I have two Bibles ready to give to my grandchildren and a third Bible that will be marked from Genesis to Revelation by the end of this year (2015). However, since I have four grandchildren and only three Bibles, I pray the Lord lets me live at least long enough to prepare a fourth Bible to leave behind.

I’m also collecting all of my newspaper columns and publishing them in a series of books, which I plan to leave for my family. One book is finished (1984-1992). However, I still must prepare books of columns written between 1995 and the present (2015). That’s a huge project!

I also want to compile my poetry into book format, a lesser project, to be sure, but one I’d like to do.

I also want to digitize slides, photos, and videos so as to create a collection of family photo that will include the names and ages of the person(s) shown in the photos, along with brief notes about the events. Now, that’s the most challenging project of all since the pictures are in different formats and span a half-century!


How will I ever get all this done? By working a few minutes here, a few minutes there on a regular basis. But I will do that in order to leave behind gifts that will bless others!
Posted by Johnnie Ann Gaskill No comments: