The LORD is My Shepherd 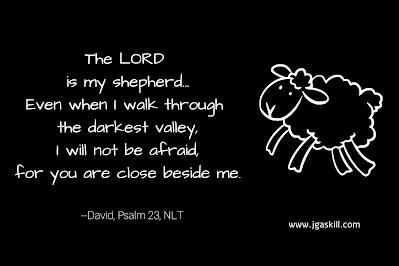 I'm scheduled to have surgery on my right hip tomorrow. Instead of thinking about things that could go terribly wrong, I'm choosing to reassure myself, as David did centuries ago, by reminding myself that the LORD is my shepherd. He is the one who guards me, cares for me, provides for me.... I will trust Him to be with me and to provide all I need during the surgery and during the months of recovery.

Since He has faithfully tended me all my life, why would I doubt Him now?

Out of the Maze

At the beginning of Psalm 77, the writer (Asaph) seems to be as confused and scared as someone who’s trying to find his way out of a maze on a foggy night. Perhaps we identify with him when he says,

I cried out to God with my voice…

And He [listened] to me.

…I sought the LORD;

My hand was stretched out in the night without ceasing;

Even remembering God troubled Asaph. Why? He doesn’t say, but I wonder, Was it because he thought God wasn’t acting like the kind of God he’d known and trusted? That could explain why he complained and felt overwhelmed.

Following the first three verses is the word Selah, which one Bible version translates “Pause in his presence.”

Asaph does that. He remembers the “good old days.” He searches for answers to hard questions: Will the Lord cast off forever? Will He ever be favorable toward me/my nation again? Has His mercy ceased forever? Has His promise failed forever? Has God forgotten to be gracious? Has God become so angry that He has shut up His tender mercies?

But…beginning in verse 10, Asaph’s thinking shifts dramatically. He says, both to himself and to God: 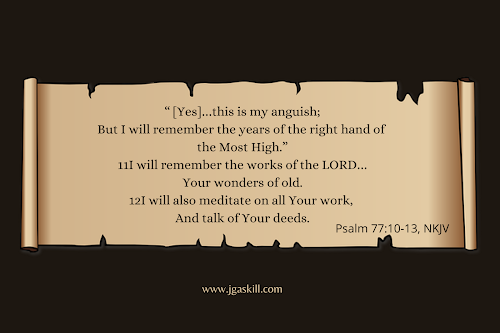 In the remainder of the psalm, Asaph does those three things—and finds the way out of the spiritual maze.
Posted by Johnnie Ann Gaskill No comments: