While on a recent vacation to Crescent Beach, Florida, I woke up before dawn every morning, eager to head to the beach and watch the sun come up over the Atlantic Ocean. (Although the same sun comes up where I live, I rarely go outside to see it, because so many trees block my view. But at the ocean, nothing obstructs the wonder and beauty of sunrise.)
So, out I’d go and stroll along the beach as I waited for the majestic display. One morning, I noticed a man who was walking near the water’s edge, glancing frequently toward the east, as I was doing, eager for the first glimpse of the sun. His dog ambled hither and yon, obviously happy to be out and about on a beautiful morning.


When his dog started to approach me, the man also walked quickly toward me, saying, “Butter! Come here!” The dog obeyed. 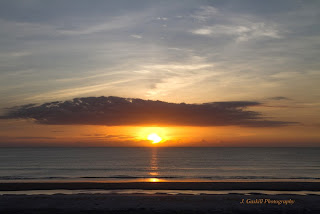 As soon as the man and I were in “speaking distance,” I said, “God puts on an awesome show every morning, doesn’t He?”
The man smiled. “Yes, He does! When I’m out here, I feel like I do in church.”


I nodded, for I, too, was worshipping the Creator, as was the psalmist (David) when he wrote these words centuries ago: “The heavens tell of the glory of God. The skies display his marvelous craftsmanship. Day after day they continue to speak; night after night they make him known. They speak without a sound or a word; their voice is silent in the skies; yet their message has gone out to all the earth, and their words to all the world” (Psalm 19:1-4, New Living Translation). 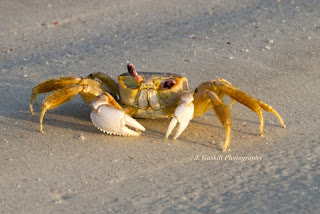 Thankfully, the man and I received “the message” that morning on the beach. With glad hearts, we went our separate ways. As I photographed sea shells and crabs and birds and sea turtles' nests and white-capped waves and an ever-changing sky, my “praise and worship” service continued.
Posted by Johnnie Ann Gaskill No comments: