Prior to going to see the 20 million daffodils blooming on hillsides, woodlands, and valleys at Gibbs Garden in Ballground, GA, I visited the garden’s website (www.gibsgardens.com) to find out more about the place my neighbor and I and two of her friends (who are now my friends, too) were going. On the website, I found a couple of lines from a poem written by William Wordsworth and published in 1807.
Since I loved the words in the poem, I searched for information about it. I learned that the inspiration for the poem had come during a walk the poet had taken with his niece Dorothy on April 15, 1802.  The two of them were enthralled by the “long belt” of daffodils growing along the seashore. Wordsworth later wrote “I Wandered Lonely as a Cloud” (also known as “Daffodils”), which became his most famous work.
Since my humble words can't compare with those of the famous poet, I'll gladly let his words speak for me. Even though, like Wordsworth, I am no longer at the site where I first saw the acres of golden daffodils, I can still see them with my "inward eye." Like Wordsworth, the mental pictures fills my heart, again and again, with pleasure. I have no way of knowing whether or not such images caused Wordsworth to praise and thank the Creator for His work, but I know that, time and time again, they motivate me to praise His handiwork and to thank Him for the opportunity to see it.
I wandered lonely as a cloud
That floats on high o'er vales and hills,
When all at once I saw a crowd,
A host, of golden daffodils;
Beside the lake, beneath the trees,
Fluttering and dancing in the breeze.
Continuous as the stars that shine
and twinkle on the Milky Way,
They stretched in never-ending line
along the margin of a bay:
Ten thousand saw I at a glance,
tossing their heads in sprightly dance.
The waves beside them danced; but they
Out-did the sparkling waves in glee:
A poet could not but be gay,
in such a jocund company:
I gazed—and gazed—but little thought
what wealth the show to me had brought:
For oft, when on my couch I lie
In vacant or in pensive mood,
They flash upon that inward eye
Which is the bliss of solitude;
And then my heart with pleasure fills,
And dances with the daffodils.
~William Wordsworth 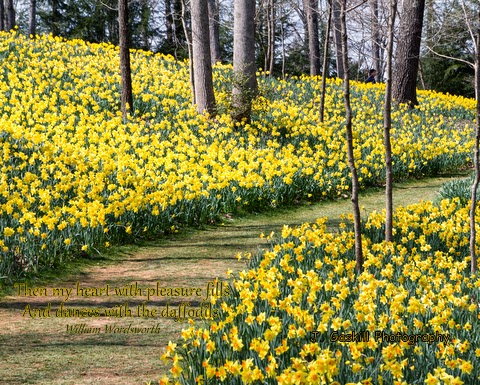