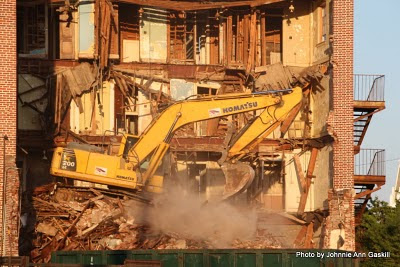 As I watched a piece of heavy equipment tear down an old building that had long been an historic landmark in our town, I thought, “This is coming down much faster than it went up.”
According to an article in one of the local papers, those who attended the hotel’s grand opening in 1928 had deemed it “magnificent” and “gorgeous.” For many years, the four-story hotel attracted many visitors to the area and hosted civic club meetings, wedding receptions, showers, class reunions, and so forth.
But the years took their toll on the once grand hotel, and it had stood empty since the early 1990’s. Now, it’s being torn down, saddening many people and greatly altering the landscape.
I thought about the demise of the old hotel one recent morning as I heard a song on the radio that said, in part, “People don’t crumble in a day.” In other words, deterioration is usually a slow process, although when destruction is complete, it seems to have happened quickly. For example, through the years, neglect and the forces of time had been slowly destroying the old hotel. Yet, when the wrecking crews moved in, it was reduced to huge piles of rubble in a matter of hours. In about a week, all the debris had been hauled away, leaving the area ready to be used in a new way.
Similarly, we don’t often see the subtle changes that point to our demise. For example, we often fail to notice how our attitudes and actions are slowly propelling us down the path to pain and/or ruin. But, as the years pass, our condition becomes increasingly obvious. Our health begins to fail or our money runs out or our career ends abruptly or our reputation is ruined because of “little lapses” along the way.
Then, we, like the old hotel, come to an end that neither we nor anyone else expected when we set out upon life’s path. But as the song I heard also says, “It’s a slow thing when you give yourself away” or, to put it another way, when you and I give in to temptations that lead us down wrong paths.
As the Bible points out, there are definite steps that lead to destruction: ”Temptation comes from the lure of our own desires. These evil desires lead to evil actions, and evil actions lead to death” (James 1:14-15, New Living Translation.)
The King James Version, an older translation, describes the progression this way: “But every man [person] is tempted, when he is drawn away of his own lust, and enticed. Then when lust hath conceived, it bringeth forth sin: and sin, when it is finished, bringeth forth death” (James 1:14-15).
So whether we read the older version or a more contemporary one, the path to ruin is easy to understand, isn’t it? Desires. Deeds. Death. Yet, we often don’t see the progression, because, as in the case of the old hotel, deterioration can be imperceptible—on a daily basis. But as time passes, we begin to see how far we’ve gone in the wrong direction, sometimes to the point of total ruin.
Little wonder, then, that the Bible says, “Above all else, guard your heart, for it affects everything you do” (Proverbs 4:23, NLT). So, let’s keep watch over our daily choices, habits, and words, for they reflect the desires that are within our hearts.