Blessings in Every Trial

For over two months now, I’ve been experiencing round-the-clock nausea. While my doctor has no definitive answer, yet, as to why, he has told me I do have gastritis and esophagitis, which he attributes to acid reflux. He wants me to have more diagnostic tests to find out for sure what’s really causing the problem.
In the meantime, I continue to feel miserable. I am sick of being sick! Increasingly, I’m giving up activities, like photography, that I used to engage in because bending over, even slightly, produces more nausea.
One weekend, when the nausea was particularly bad, I spent all day Saturday propped up on the couch, trying to stay as still as possible. I watched a photography CD that inspired me so much that I played it again and again, longing for the images I take to convey the beauty and wonder of the Creator’s work.
Sunday, I felt just a tad better, so I spent most of the day at my computer, which didn’t require much bending (other than when I got up and down). Although I couldn’t go outside in the spring-like weather and photograph the daffodils, I spent many pleasant hours designing 3.5 x 5-inch note cards.
To create them, I used photos I’d taken some time ago. By late afternoon, I had several designs that I really liked. One of the last ones I created (shown here) had a pastel pink background (that was actually a close-up of a camellia bloom I’d taken weeks ago). 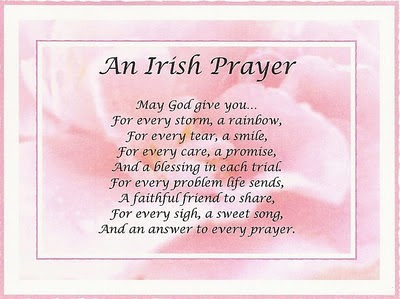 As I worked with that quote—changing the font size and color, creating a border for it, etc.—I realized God had indeed given me “a blessing in each trial,” several blessings, in fact! For example, if I hadn’t been too sick to do other things, I probably wouldn’t have designed the note cards. And the persons to whom they would have been sent (whether by me and/or by those who purchased the cards) would have missed out on much-needed encouragement.
Another blessing I’ve received during this trial has been “a faithful friend to share” it. Actually, I have many friends who are concerned about me and are praying, as I am, that I will soon be well. Although none of my friends can make the nausea go away, their support helps me endure it.
As I reflect on this current problem, I realize anew that others I’ve encountered have also contained blessings of some sort. Initially, some were not obvious, but as I look back on various trials I’ve been through, I can see God-given blessings in each one.
That’s why I remind myself often of Romans 8:28: “God causes all things to work together for the good of those who love Him and are called according to His purpose for them.”
Although the “things” themselves aren’t necessarily “good” (my nausea, for example), God takes all difficulties and distresses and extracts blessings from them. I do not understand how He does it, only that He does!
©2010 by Johnnie Ann Burgess Gaskill
Posted by Johnnie Ann Gaskill No comments: