Thy Servant Is Listening

Although I was tired to the bone, I felt strangely drawn to a Kindle book I’d downloaded that day. So, instead of going to bed, as my tired body wanted to do, I curled up on the sofa, with my Kindle in hand, and began to read J.C. Ryle’s book, A Call to Prayer.


I was immediately captivated (and convicted!) by his words, which he’d written in the 1800's, so much so that I read past midnight and then past 1 a.m.


I realized (1) that the book was no ordinary one, (2) that God intended me to have it, (3) that He was speaking to me through the words He had inspired His servant, J.C. Ryle, to write many years before I was born, (4) that He was making me aware of my sin of prayerlessness, (5) and that He wanted me to confess that sin and turn from it immediately and permanently.


I confessed that sin (and others!) and then asked God to help me to put Him first in my life, to continue to speak to me, and to help me obey Him.


I slept soundly that night and then awoke the following morning feeling rested and ready to seek God and to do His will.


Rather than just offer a quick prayer before I began to read from the Bible, I spent several minutes just talking with my Father and asking Him to speak to me through His Word and by His Spirit. He did!


The passage that was “next up” on my daily Bible reading plan was 1 Samuel 3, a very familiar story about the young boy Samuel who received a word from the Lord, though such words were rare in those days, due to the fact that no one really wanted to hear what God had to say about anything.


During the night, Samuel heard a voice calling his name. Naturally, he assumed that Eli, the priest with whom he lived, was the one calling him. So, he ran to Eli’s bedside and said, “Here I am, for you called me” (v.5).


Since Eli had not been the one calling the boy, he instructed Samuel to go back to bed. But once again, Samuel heard someone calling his name and hurried to Eli’s bedside, where he learned that it was not Eli who was calling him.


When someone called Samuel a third time, he made another trip to Eli’s bedside. This time, Eli discerned that it was the Lord calling Samuel. 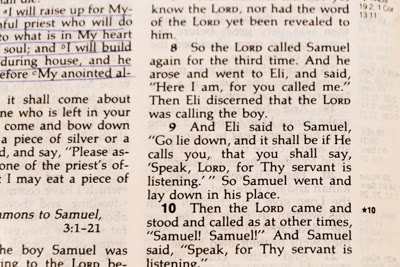 As before, Eli told Samuel to go back to bed, but he also said that if the Lord called Samuel again, Samuel should say, “Speak, LORD, for Thy servant is listening” (v.9).


The Lord did call to Samuel again. And when Samuel said, “Speak, for Thy servant is listening,” the Lord told Samuel what He wanted him to know and to do.


After an extended prayer time, I felt compelled to go to the computer to write these words rather than do the other tasks that were “calling my name.” The Lord had spoken to me, I listened to Him, and I obeyed. May that continue to be true of me—and of you, Dear Reader.