When a 95-year-old woman and I were talking one afternoon, she lamented the hardships that being that old had brought to her.

I acknowledged that the aging process involves changes that are hard to face. Declining health.  Becoming less independent. Having to depend more and more on others.

After we talked a bit about all that, I said, “But God has been faithful to us in all sorts of difficult situations through the years, hasn’t He?”

When she agreed, I said, “He will see us through this stage of our lives, too.”

I thought of that conversation again the next morning when my daily Bible reading brought me to Psalm 27, which is a prayer of David. Because of the conversation described above, I paid particular attention to the request David made in verse 9: 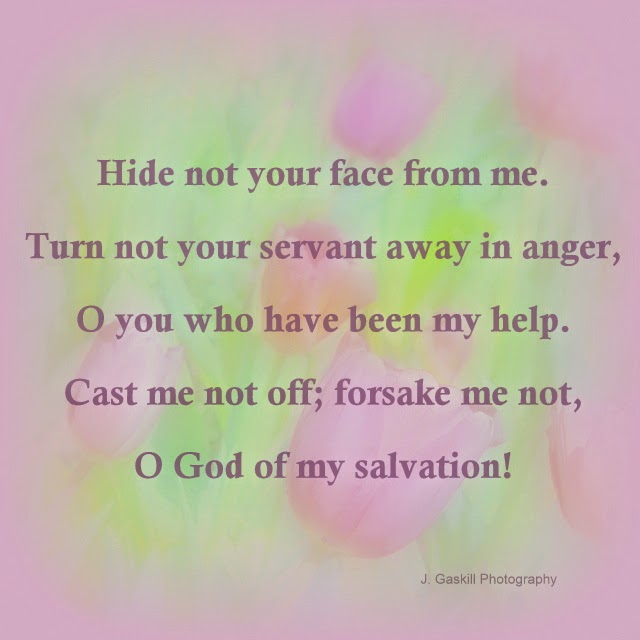 The morning after that, the Spirit continued to speak to me about the matter. He brought to mind the words to a hymn I’ve known and loved through the years, as my parents did. The words to “Precious Lord, Take My Hand” were written in 1932 by Thomas A. Dorsey in Chicago, Illinois, after his wife died while giving birth to a child, who also died shortly thereafter. Thus, the writer was no stranger to sorrow and difficult situations.  But Mr. Dorsey wisely asked the LORD to take his hand, linger near, and lead him through the darkness to brighter times.  Listen to the song by clicking here.

Dear Reader, we can relate to Mr. Dorsey’s requests, can’t we? Thankfully, the LORD not only hears but He also says yes to our pleas for His presence and His help, especially when, for whatever reason, we are tired and weak and worn.

As my dear mother so often said, “Whether He spare or share, He will be there!” What a comfort!
Posted by Johnnie Ann Gaskill at 10:00 PM