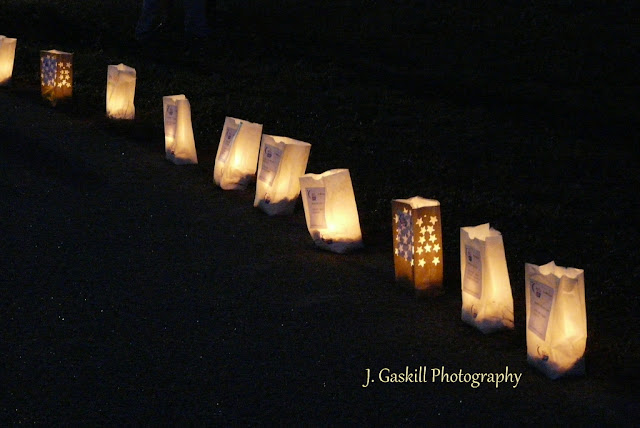 One Internet website invites certain people, usually those whose names are widely recognized, to share (in 500 words or less) some wisdom they'd like to pass on to others. As I reflected on that challenge issued to those referred to as "luminaries," I recalled having attended a local Relay for Life event. As dusk descended that Friday evening, volunteers placed lunch-size paper bags all around the perimeter of the walking track where the event was being held. On each bag was written the name of (1) a person who had battled or was still battling cancer and (2) the person who had purchased the luminary in honor of or in memory of the cancer patient.

The darker the night became, the brighter the candlelight shone through the bag. As I strolled around the track, I read the names on each bag. I recognized some of them. Several I knew well, including my mother, my mother-in-law, and one of the charter members of the camera club to which I belonged. I thought about how they had inspired me in so many ways. I thought about their courage, their faith, their endurance... Truly, they were (and still are) luminaries in my life!

I recalled that the Bible says there's a noticeable difference in people who are filled with a God-given inner light and in those who are not:

Do all things without grumbling or disputing,
that you may be blameless and innocent,
children of God
without blemish
in the midst of a crooked and twisted generation,
among whom you shine as lights in the world,
holding fast to the word of life...
Philippians 2:14-16a

I also remembered a song I've known since childhood: This Little Light of Mine by Harry D. Loes. As I sang the words, I recommitted to letting my little light shine. Will you, Dear Reader, do the same? Even a little light is obvious in the darkness.
Posted by Johnnie Ann Gaskill at 11:59 PM